A couple months ago, two forest monks arrived in Boston looking into the possibility of starting a forest monastery somewhere in the New England area. They are staying in a temporary residence called the Boston Vihara for the four-month period between July and October. When it being planned earlier in the year, it was decided that it would be a good idea have a lay person to live with them and help with things like money, food and other tasks that needed to be done at the Vihara.

Earlier in the year I was contacted to see if I would be interested in being that helper. I was very interested, but do to a prior commitment, I could only do it for half the time. Fortunately Jeff, a friend who I had met at Abhayagiri last year, also signed up and so he did the first half. Last week, being half way through the period between July and October, Jeff passed the baton to me as we passed each other in Boston's Logan Airport.

Part of being this new helper was also adopting the role of an Anagarika. This would be somewhat different than being an Anagarika in the normal monastic setting. First, it would just be short-term and temporary; just two months. Second, the commitments/responsibilities would be simpler, e.g., living in a temporary city residence with two easy-going monks. That said, the core elements would be the same: taking the 8 precepts, wearing white and taking dependence with the senior monk. So, last Wednesday, I ordained as a temporary Anagarika. 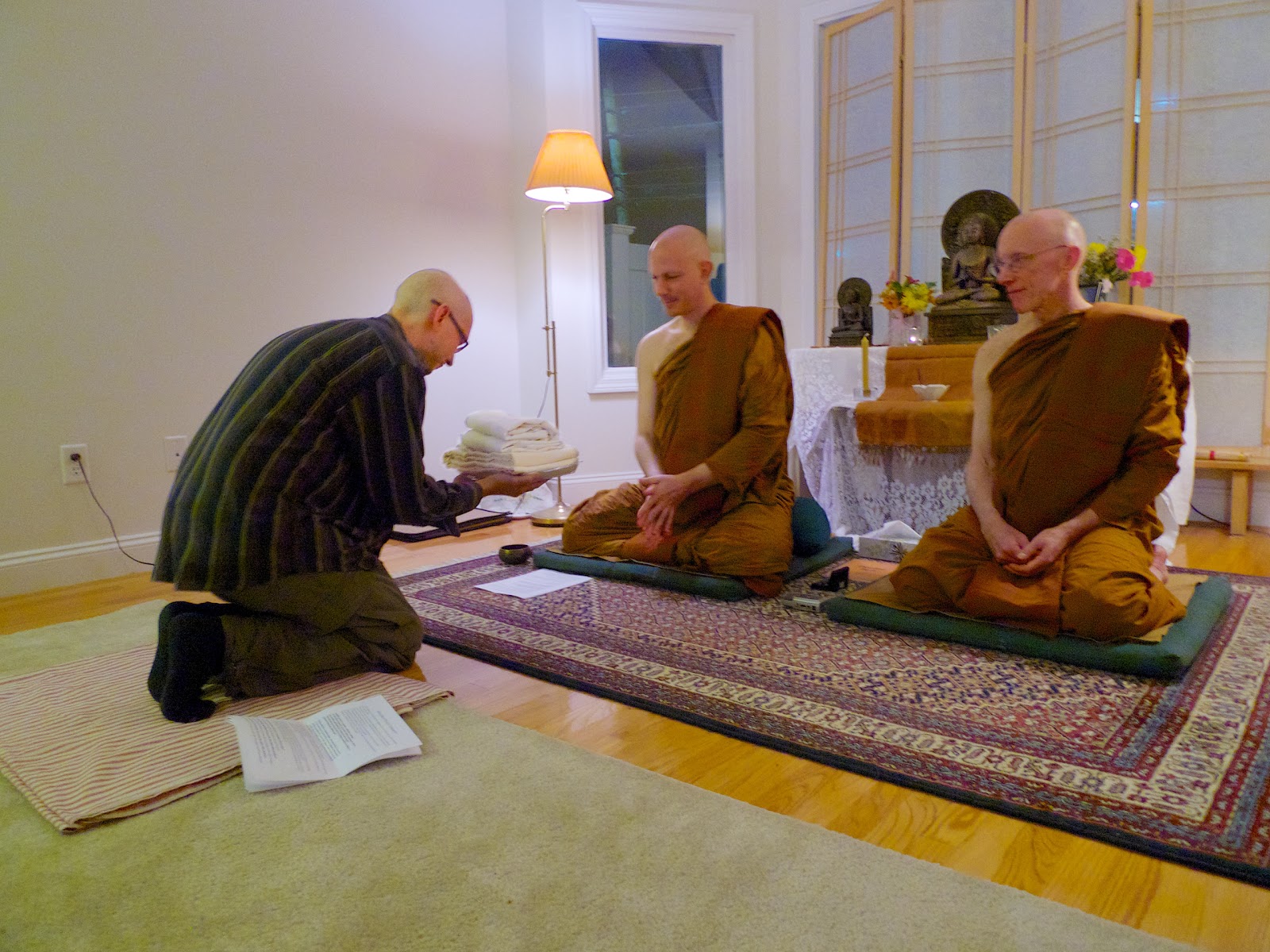 This involved some formalities. I had my head and eyebrows shaved ("nooo...not my eyebrows!). I also had to properly request the Anagarikaship, 8-precepts and dependence which entailed reciting a number of lines in Pali (the doctrinal language of the early Buddhist scriptures). Oh yeah, there was lots of bowing. As one of the monks pointed out, "when in doubt, bow." 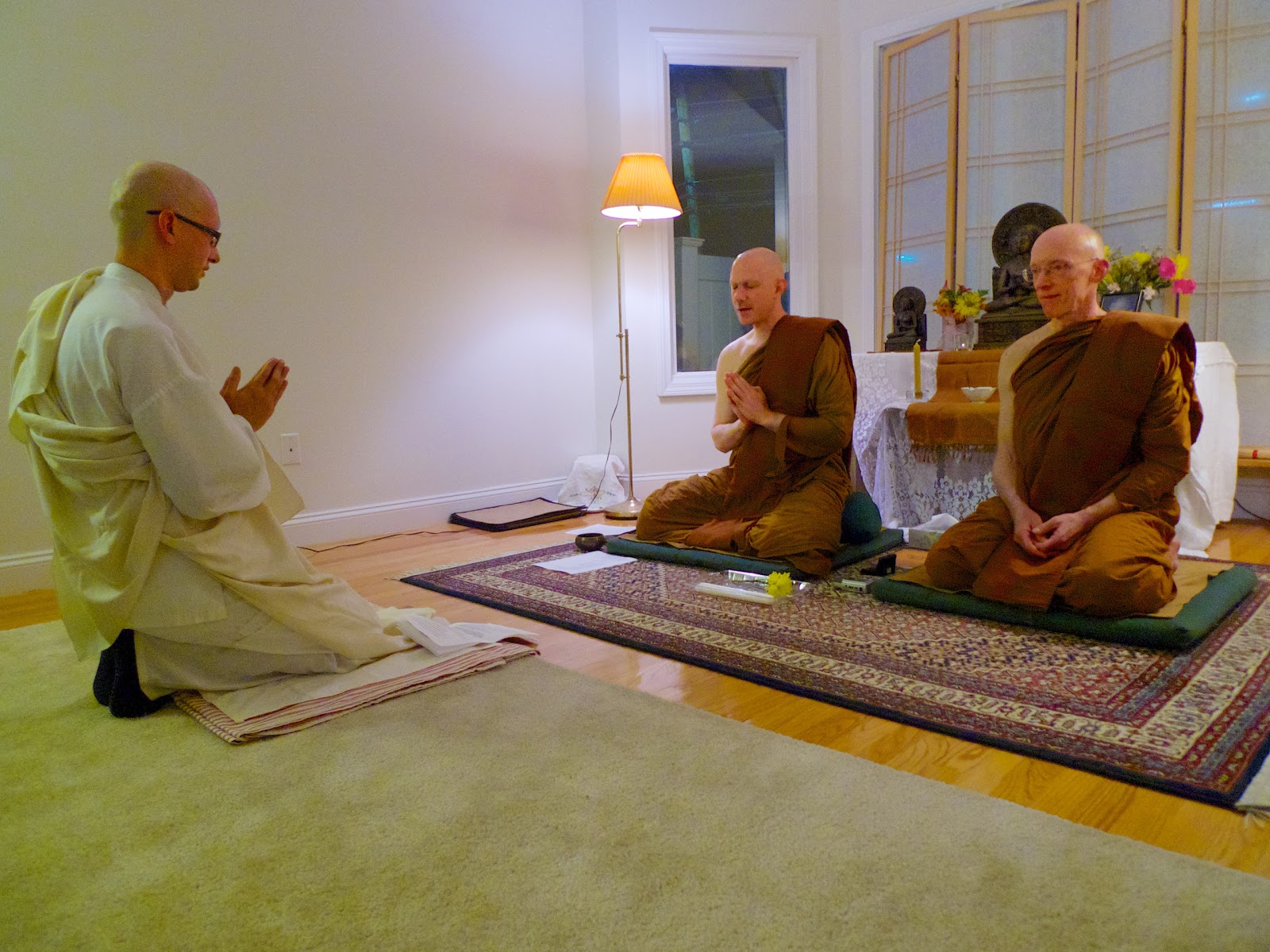 Since it was a moon-night evening, a number of people showed up to watch the whole event. A number of them really seemed to enjoy it. I, on other hand, was pretty darn nervous. I noticed by the end, sweat had dripped down on the notes laying on the ground below me. Although I had been on the eight precepts for quite a while now, and been working in various roles and jobs in different monasteries, suddenly being an Anagarika brought a new, unexpected dimension to the equation. It was a deep, bowel-wrenching anxiety, where something woke up and understood, "ohhhh-nooo...I can't be a slob anymore!"

As Ajahn Jayanto (the senior monk at the Vihara) would explain to me, these precepts and formalities, while intended to simplify things, are also designed to kick things up a notch. So things start to arise that you didn't expect. And sometimes these things can illuminate things that are often there, but not in a way that can be clearly seen. Anyways, being a non-slob is not so bad. It's actually kind of nice -- more food ends up in my mouth and perhaps stray animals won't pester me as much. 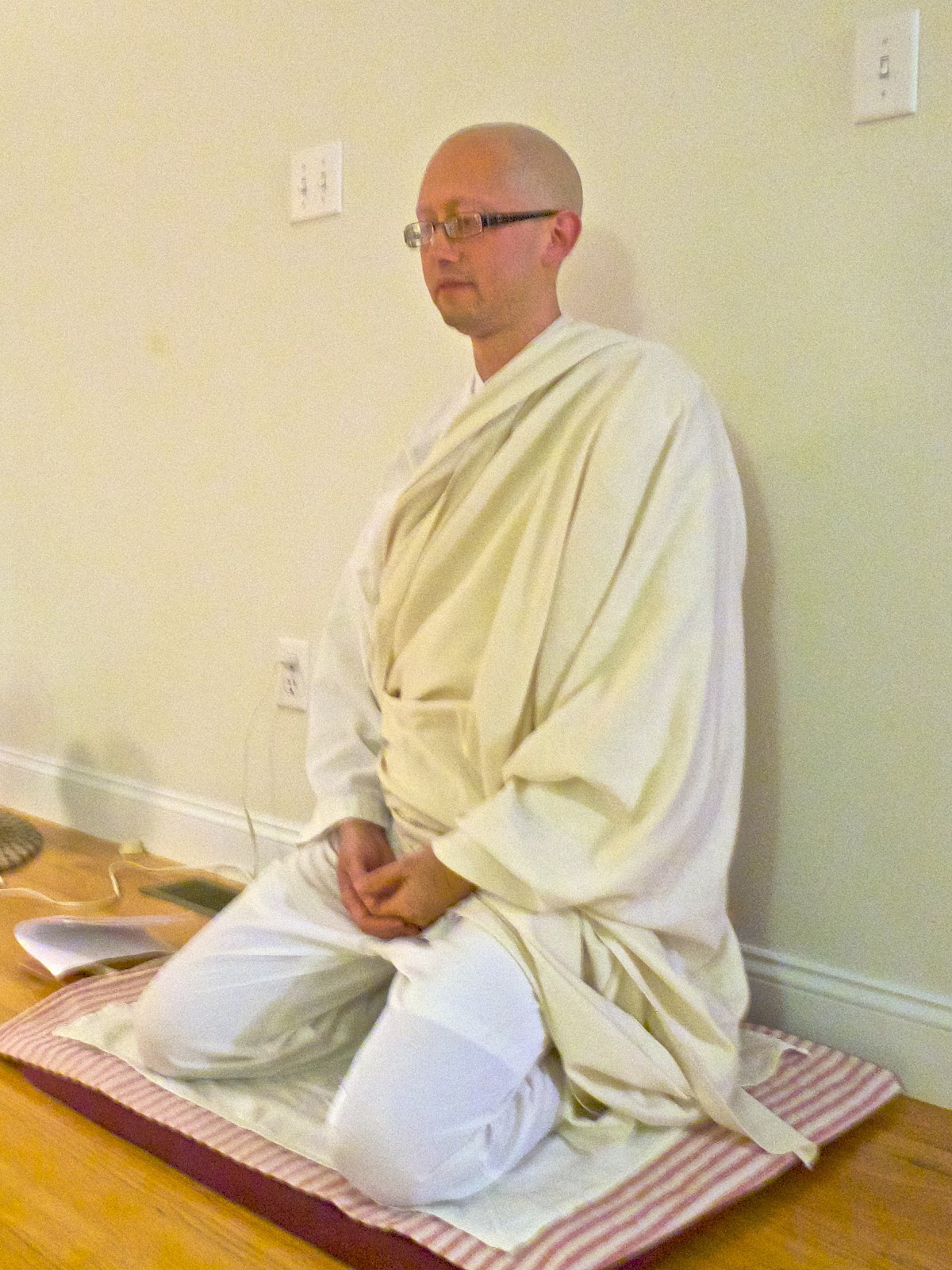 Anyways, If you're in the Boston area, and you're interested in dropping by, I'll be here until the end of October. We have meditation and chanting most mornings and evenings, a dharma talk (roughly) once a week, and a meditation workshop on Sundays (hosted at another location). Feel free to go to the Boston Vihara website to find out location and times. It would be great to see you!

I'll also be around the area for a week or two in the beginning of November. Feel free to send me an email if you'd like to get together while I'm here.
Posted by Unknown at 3:15 PM